We are pleased to announce that the conductor Cristóbal Soler has joined our roster of artists and, from here, we would like to thank her very much for the trust that he has placed in GoDirect.

Considered one of the most important conductors of his generation, Cristóbal Soler has established a successful career conducting extensive symphonic repertoire and opera productions. He has always received excellent reviews that emphasize his charisma and interpretation as well as accurate and consolidated conducting technique. This is the result of a solid and rigorous training in Vienna during a decade, from the hand of great directors like Harnoncourt, Sawallisch, Prêtre, Vladimir Fedoseyev or Mariss Jansons.

Similarly, educational projects are part of his aims (Spanish premiere of "Pinocchio", by P. Valtinoni). Soler is very concerned about the creation of new public and ongoing support to new generations of musicians.

Cristobal Soler is the Artistic Director of the Religious Music Week of Cuenca (awarded with the “City of Cuenca Prize”); Artistic and Musical Director Cullerarts (Cullera, Valencia) and Chairman and Founder Member of AESDO, the Spanish Association of Conductors.

Cristóbal Soler was born in Alcásser, Valencia. He started his studies in orchestral conducting under his mentor, Maestro José Maria Cervera Collado. He also appeared in numerous productions as the assistant conductor at important venues such as the Gran Teatre Liceu in Barcelona, Teatro Lírico Nacional de la Zarzuela in Madrid, Staatstheater Karlsruhe or the National Opera of Romania, where he held the position of assistant conductor during one season. After completing his Degree of Composition and Orchestral Conducting, he continued his graduate studies as conductor at the University in Munich, where he obtained high honors. He was the youngest artist ever to conduct a subscription concert with the Valencia Symphony Orchestra and still maintains a fruitful collaboration as guest conductor since then.


​Soler was the founder and artistic director of the Philharmonic Orchestra of the University of Valencia (1995-2010), winning the First Prize at the International Youth Music Festival and Competition in Vienna in 1998. He still serves as an Orchestra Direction graduate professor.

Nikolaus Harnoncourt invited him to assist with his 2003-2004 rehearsals in Vienna, Graz, Berlin and Zurich. During the same time, while caring his integral formation in Central Europe, he collaborated with some of the most representative orchestras in Spain like the Orchestra of the Spanish National Radio and Television Corporation, ORTVE (new engagement as Guest Conductor in collaboration with National Heritage), Galicia Symphony Orchestra, Navarre Symphony Orchestra, Community of Madrid Orchestra, and Catalonia National Orchestra, performing at halls such as the Palau de les Arts in Valencia, Auditorio Nacional in Madrid, Palau de la Música in Barcelona and Auditorio Baluarte in Pamplona.

In parallel, he gained recognition with subscription concerts across Europe with the Lausanne Chamber Orchestra at the Victoria Hall in Geneva, the Salle Metrópol in Lausanne, and an outstanding Austrian tour including theatres such as the Mozarteum in Salzburg, or the Austria Centre in Vienna.

​Amongst his recordings, it is worth mentioning Stravinski´s "The Soldier´s Tale", Britten´s "The Young Person´s Guide to the Orchestra", Llopis´ "Abu Simbel", works by Falla, Granados, Chapí, Esplá, Gomis and Sarasate. He is currently working on a series of recordings of Spanish repertoire: Manuel de Falla and Granados (in commemoration of his double anniversary) and a CD recorded for Naxos International: a selection of today´s most outstanding Spanish composers (Francisco Coll, José Luis Turina, Sánchez Verdú). 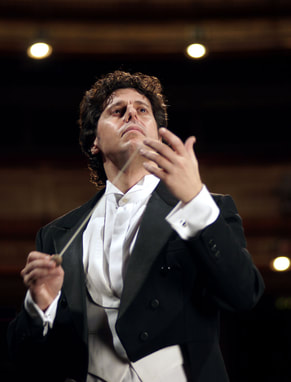